CATEGORIES
Home    Community News    Clemson’s IR Content To Be Harvested in the DPLA: Find Out How You Can Do It Too!
June 3rd, 2015 | Tags : DPLA, Clemson University | Category : Promoting the IR, Publishing, Special Collections

Clemson’s IR Content To Be Harvested in the DPLA: Find Out How You Can Do It Too!

Clemson’s IR, TigerPrints, is on a journey of increased discoverability through Digital Commons to the South Carolina Digital Library (SCDL) and on to the Digital Public Library of America (DPLA). In the words of Andrew Wesolek, Head of Digital Scholarship at Clemson University, they are “expanding the role of the repository and enhancing the discoverability of Cultural Heritage objects.” Andy told us the story of how he got content from his IR ready to be harvested by the DPLA with help from their bepress consultant, and we’re here to say that you can do it too!

Andy underlined the importance of partnering both with bepress and with his state’s Digital Library hub, the South Carolina Digital Library (SCDL), in his workflow. He also emphasized that “Digital Commons offers a constant branded environment for Clemson scholarship and cultural heritage items”—important when content is picked up later in so many different ways.

As the library staff were shifting efforts towards digitization of more and more of Clemson’s holdings, they looked to their new IR, TigerPrints, which holds unlimited objects.  They then asked, “Can we have content deposited in TigerPrints be found in the Digital Public Library of America?” The answer was a resounding yes!

In terms of content, they looked for material that was at the intersection of the intellectual output they house in their IR with the Cultural Heritage material sought by the DPLA. The collections thus far include The Agrarian, The Bobbin & Beaker, the yearbook TAPS, and the history of football programs now in the DPLA.

Specifically, Clemson set out to make sure their metadata met the needs of SCDL, thus automatically meeting the needs of DPLA as well. Bepress leveraged the core capabilities of the DC system for them and thus allowed the content to be harvested by DPLA. Your bepress consultant will be happy to do this for you too—contact us anytime! 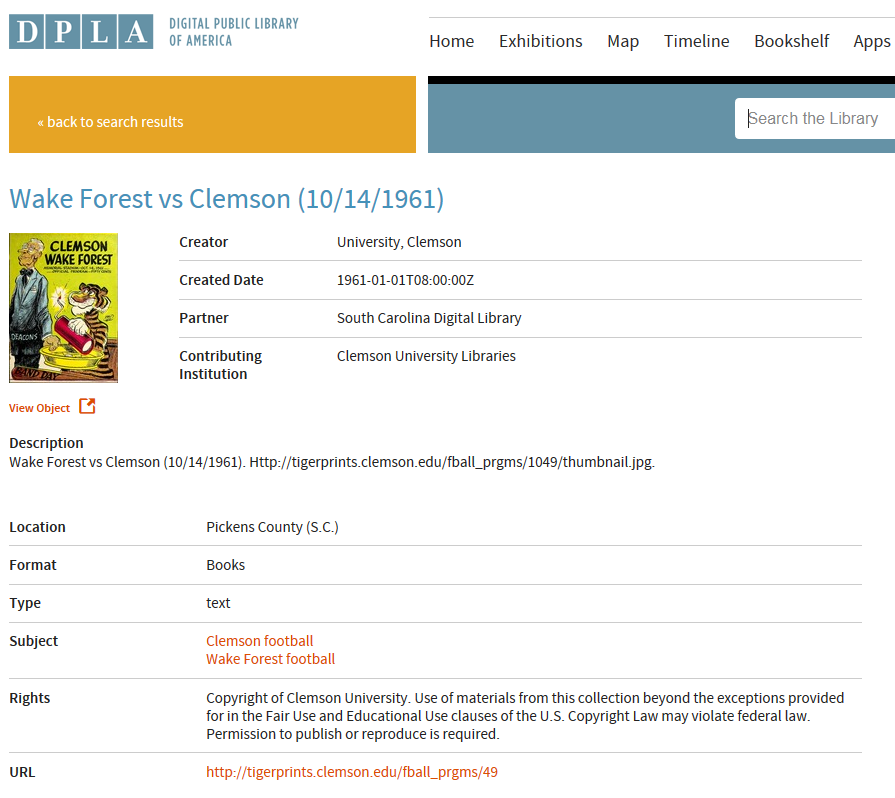