The University of South Carolina’s Scholar Commons has become the online home of Studies in Scottish Literature. The journal, founded and edited until recently by the renowned Scottish literature scholar G. Ross Roy, had been printed and mailed to subscribers and libraries for nearly fifty years, but the journal itself had not preserved nor archived its digital files. Current editors Patrick Scott and Tony Jarrells, along with Scholar Commons’ repository manager Chris Hare, realized that the journal could reach a far wider audience if they archived past issues and started publishing future issues online. As Professor Scott explains, “Scottish Literature is a growing field, both in Scotland and around the world, but outside Scotland, there is rarely a big enough concentration of scholars/students in one university to ensure a print-only journal would continue to be available.”

Making the journal available online has paid off substantially. The editors were pleasantly surprised to learn that scholars across the globe were downloading articles immediately. Within a month Studies in Scottish Literature was the most popular collection in Scholar Commons, and SSL articles accounted for more than half of the repository’s “Most Popular Papers.” The Glasgow-based Association of Scottish Literary Studies added links to many SSL articles in their public-access database, focusing on material for Scottish school-aged students who are now required to study some Scottish literature, and certain controversial papers from one issue were selected for a multi-university research and discussion group in Scotland.  According to Professor Scott, “Simultaneous immediate access to this issue by many scholars creates a buzz that the gradual mailing out and library processing of the print volumes cannot.” 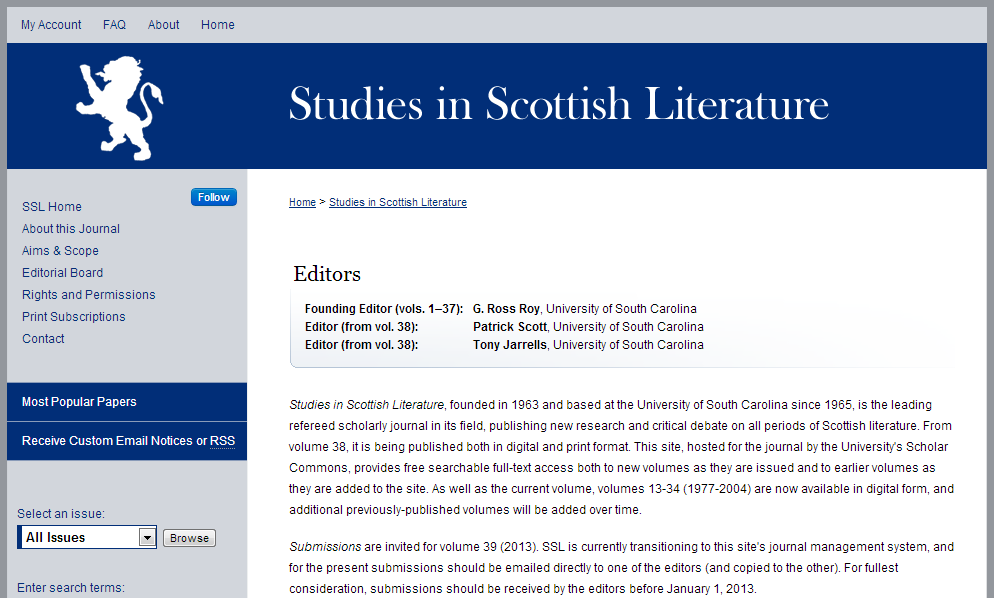 We use cookies on our website to give you the most relevant experience by remembering your preferences and repeat visits. By clicking “Accept”, you consent to the use of ALL the cookies. However you may visit Cookie Settings to provide a controlled consent.
Cookie settingsACCEPT
Manage consent

Performance cookies are used to understand and analyze the key performance indexes of the website which helps in delivering a better user experience for the visitors.

Analytical cookies are used to understand how visitors interact with the website. These cookies help provide information on metrics the number of visitors, bounce rate, traffic source, etc.

Advertisement cookies are used to provide visitors with relevant ads and marketing campaigns. These cookies track visitors across websites and collect information to provide customized ads.

Other uncategorized cookies are those that are being analyzed and have not been classified into a category as yet.